T. Joseph Hardesty, Kentucky History and Genealogy Librarian of the Louisville Free Public Library in Louisville, has provided the following how-to explanation for folks who are having serious problems locating a death certificate. It is published here with his kind permission.

Locating a Kentucky Death Record – when all else fails.

So here's a genealogical stumper to ponder – your local city directory indicates that your ancestor was alive and well at a specific time and place; the Federal Census confirms this as does letters showing a local postal cancelation, a family bible inscription, a recorded will, old photographs, an obituary and even a cemetery headstone showing his date of death (let's say 10 March 1932). Congratulations! You've collected a great deal of documentation. The only record you absolutely cannot find is the record of death. How can this be? You've searched your subscription to Ancestry three ways to Sunday and even consulted a statewide microfiche death index (1911 – 1995) found in your local library – still no record of death! This one missing document won't let you sleep at night but what can you do? Don't fret – in situations like there is one more option to pursue. 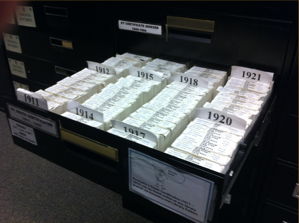 Family history researchers know that when online resources fail, one must consult the microfilm (or better, the original) copies of various collections. The Kentucky History and Genealogy section of the Louisville Free Public Library on York Street has Kentucky Death Certificates on 16mm microfilm for 1911 – 1962. [Visit our website to see a complete listing of our resources]

As you can see in the photo, Kentucky death records are arranged first by year of death then by certificate number.

There is however, a possibility of delayed certificates.

A delayed certificate of death is just what it says. John Doe in Anderson County dies in March of 1920 but before the County coroner or physician can send the death certificate to Frankfort for filing, he himself dies (or is voted out of office, goes on vacation, etc.). In this case, the certificate eventually, hopefully, arrives at the Vital Record office and is placed in what the record clerk considers the next best file (and no, not the circular file). Almost always it will be placed in the county file for the following month and stamped "delayed". Thus using the example above, if John Doe's death certificate is not in the Anderson County file for March of 1920 then look for it in the April or May file for that County and year.

If the researcher has gone to such lengths and the elusive ancestors death certificate was still not found you may conclude that:

Either a death certificate was simply not issued (yes that happened).

Perhaps the person indexing the collection for Ancestry didn't have their second cup of coffee that day – as is the case on occasion.

My hope for family history researches is that one will not be required to be this diligent in pursuit of locating a Kentucky death record. You can rest assured (sorry about the pun) that there is more than one way to break through a brick wall and that public library's and the librarians who staff them will be around to hand you a hammer and chisel.

Now for some good news! The Louisville Free Public Library has a wonderful program line-up for Genealogy Day @The Library! Visit www.lfpl.org/genealogy to learn more and be sure to tell your friends via Facebook and Twitter!

The Bullitt County History Museum, a service of the Bullitt County Genealogical Society, is located in the county courthouse at 300 South Buckman Street (Highway 61) in Shepherdsville, Kentucky. The museum, along with its research room, is open 9 a.m. to 4 p.m. Monday, Tuesday, Wednesday and Friday; and from 9 a.m. to 6 p.m. on Thursday. Admission is free. The museum, as part of the Bullitt County Genealogical Society, is a 501(c)3 tax exempt organization and is classified as a 509(a)2 public charity. Contributions and bequests are deductible under section 2055, 2106, or 2522 of the Internal Revenue Code. Page last modified: 27 Jan 2021 . Page URL: bullittcountyhistory.org/hardesty.html