Occasionally we find tidbits of information related to Bullitt County in older newspapers. When these don't seem to relate to anything else on our web site, we put them here. Below is a list of the articles that you will find on this page. 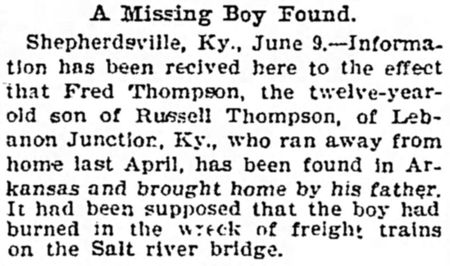 Death on the Rocks. 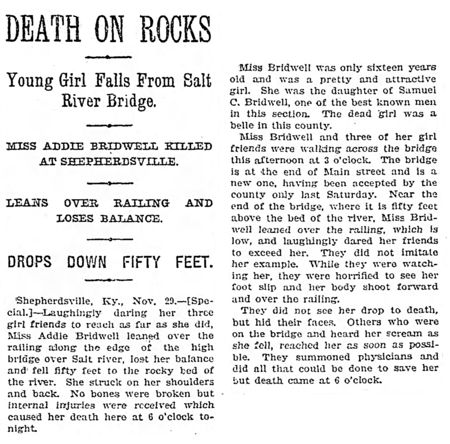 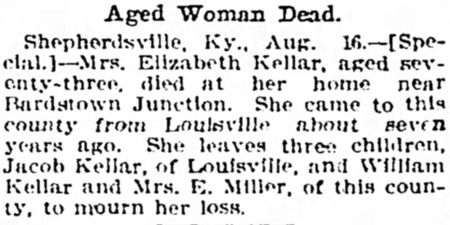 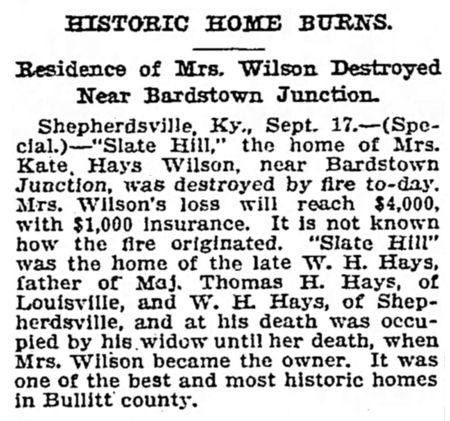 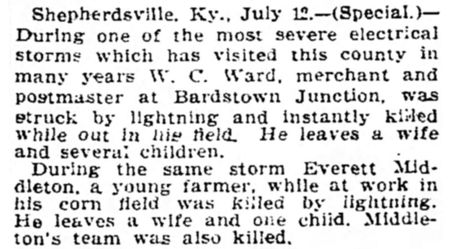 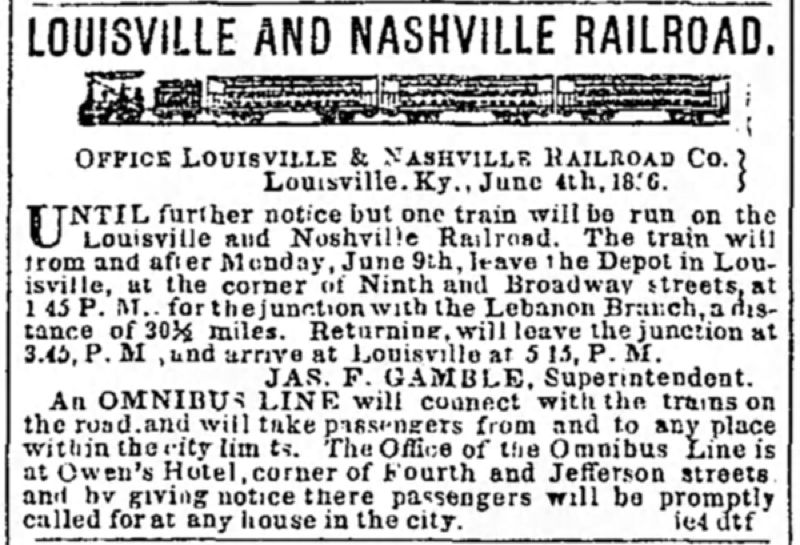 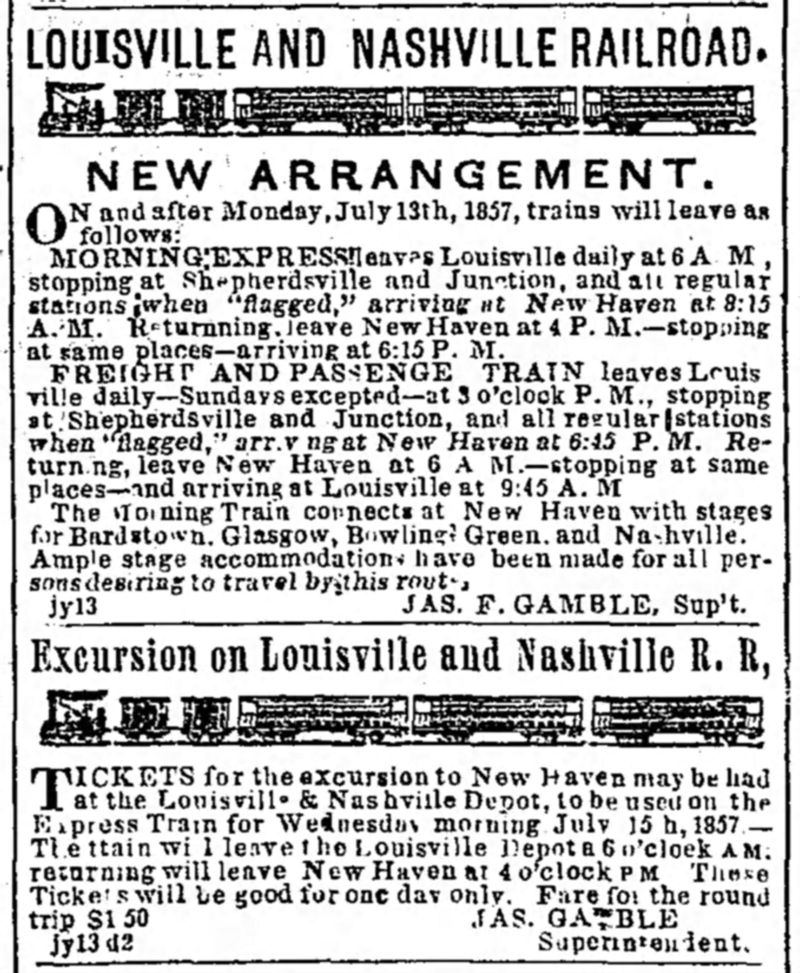 R. A. Wise was brutally assassinated on his farm, near Shepherdsville, Kentucky. When found he had seven bullet wounds in his body.

Flooding East of Lebanon Jct in 1871 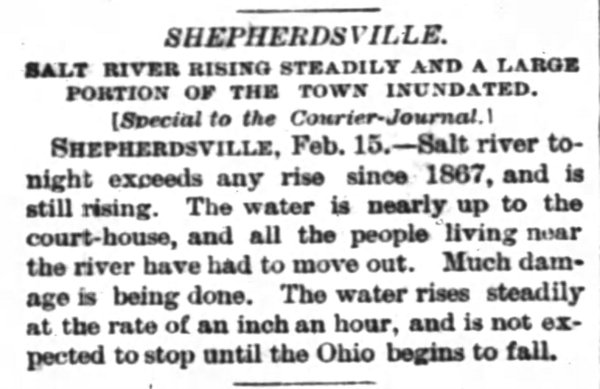 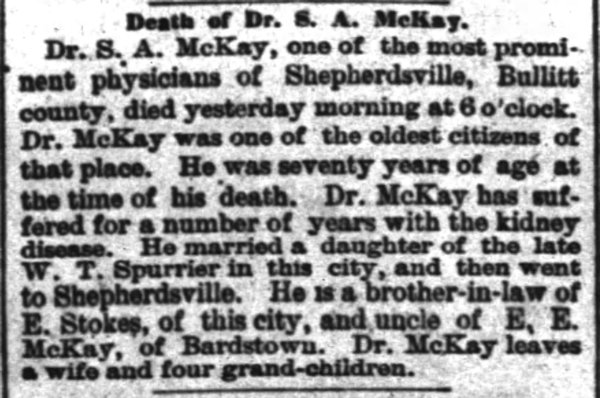 The Bardstown Record has this about an old-time citizen of Bullitt, now dead:

"Judge Hoagland was an intense Rebublican in politics, yet for many years Police Judge of Shepherdsville. He is said to have talked through his nose, and used to threaten to cut everybody with a hatchet, which was his favorite weapon. For many years he kept the Hoagland House, which, in its day, was the first hotel in Shepherdsville, and, among other things, is charged with dealing in liquid refreshments, in violation of the Bullitt County law, although at the same time, perhaps, entertaining the Circuit Judge, the Commonwealth's Attorney and the grand and petit juries. But one indictment that it was believed would 'stick' was gotten up against him, and before his trial he was called to a higher court. Judge Hoagland was once nominated by the Republicans for Representative from Bullitt and Spencer counties, when Hon. Wilhite Carpenter was the Democratic nominee, and, although the latter was handsomely elected, Judge Hoagland was very proud of the fact that he carried Bullitt." 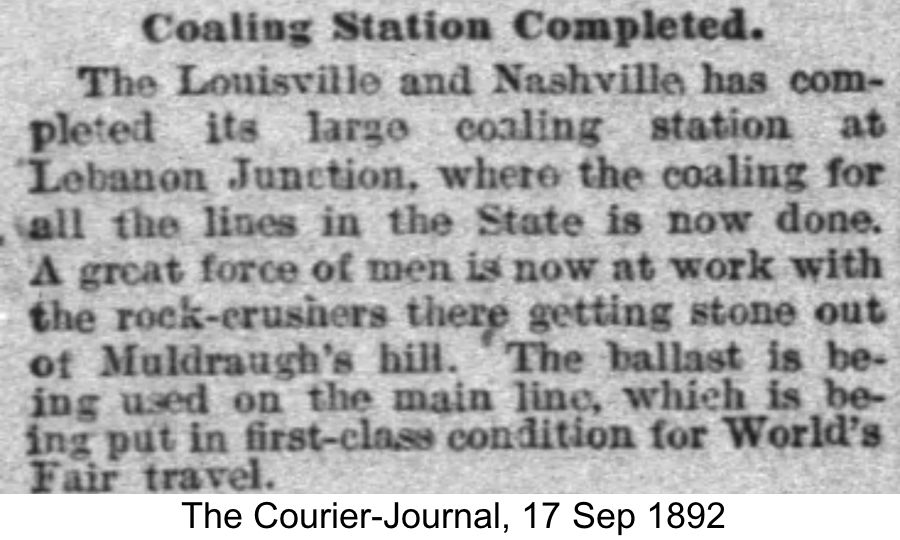 While Attempting to Save a Raft of Sawlogs in Kentucky

SHEPHERDSVILLE, Ky., jan. 10, - While attempting to save a raft of sawlogs in Salt river, W. S. Bowman, Tom MacLure and Willie Prentwood were carried away with the terrible tide and drowned.

Crean & Wilson had about 2,000 logs in the river anchored to the shore with ropes, and when the three young men saw the logs were about to float away they walked out on some of them to fasten the ropes more securely. Before they had accomplished this the ropes broke and they were carried down the river and over the falls at a terrific rate. Owing to the extreme high water and the heavy float of drift their bodies have not been found and may never be.

FROM FELON'S CELL TO FREEDOM

Louisville, Ky., June 20. - All the inmates of the jail at Shepherdsville, ten in number, made their escape at an early hour yesterday morning. They filed the bars of the cell doors, and then forming a St. Jacobs ladder by climbing on each other's shoulders, reached the roof. A reward has been offered for their recapture.

St. Mary's Catholic church, near Huber's Station, Bullitt county, was solemnly dedicated by the Right Rev. Bishop McCloskey last Sunday morning. Quite a number of Louisville people attended the solemn ceremonies. Following the dedication the pastor, Rev. Father E. E. Willett, celebrated solemn high mass. He was assisted by a number of priests from this city. Louisville musicians sang the principal solos during the mass. The dedicatory sermon was preached by the Right Rev. Bishop McCloskey. The church was originally built for another purpose by Mr. Huber, who recently sold it to the Catholic congregation at Huber's Station.

Two Louisville and Nashville freight trains met at the end of the bridge over Salt River, near Shepherdsville, Ky., killing two trainmen and injuring two.

Cards are out announcing the approaching marriage of Mr. George M. Quick and Miss Eloise Moore, which is to occur at the Methodist Church, in Shepherdsville on Wednesday, Dec. 23.

Mr. Quick is an industrious young Bullitt county farmer, who is highly spoken of. His bride-to-be is the eldest daughter of Hon. Lucas Moore, late commissioner of Agriculture, and is a handsome young lady. She is well know here where she resided for four years during Gov. Bradley's administration.

Louisville, Ky., Aug. 11 - John Barbour to-day shot and probably fatally wounded Francis Hagan, a lawyer, and brother of Prosecuting Attorney Robert Hagan of this city. The shooting occurred at the Hagen farm near Shepherdsville, Bullitt County, and will possibly end a feud of three years' duration during which each principal had occasionally shot and slightly wounded the other.

Death of Hettie Cunningham Wathen in 1912

Louisville, Ky., June 18. - Ten persons are dead and two others are probably fatally injured as the result of two accidents in this vincinity, in which passenger trains and automobiles figured.

Near Bardstown today an automobile containing Mrs. Emma Shelton and her four children, of Shepherdsville, was struck at a crossing by a northbound Louisville and Nashville passenger train. Mrs. Shelton, two of her infant children and an adult son were killed, and an adult daughter was so badly injured that she may die.

Near Moreland, in Lincoln County, late yesterday a northbound Southern Railway passenger train crashed into a machine containing George Hunn, a merchant of Stanford, his wife and five children. All were killed except one of the children, which, it is believed, cannot survive its injuries.

SHEPHERDSVILLE, Mar. 28. - Armed bandits early today held up guards at Carle Wathen Distillery at Hobbs in Bullitt County, and got away with one hundred cases of whiskey. The bandits cut telephone wires leading to the distillery making it necessary for the guard to walk here to report the fact.

On March 24, 1912, fire destroyed much of Lebanon Junction's business district. Newspapers across the country carried stories about it. Below is the news article printed in The Courier-Journal the next day. 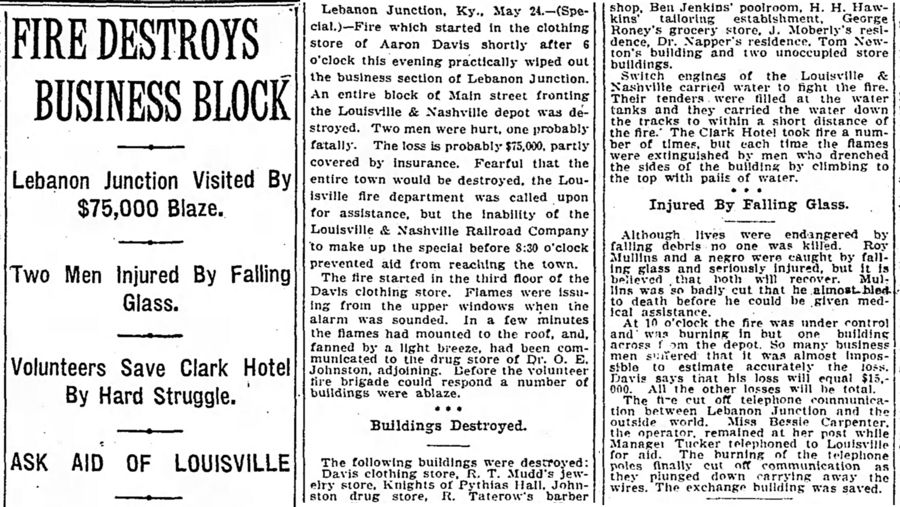 DOCTOR TO WED NURSE.
Hospital Romance First of Its Kind at Bellevue in Ten Years

Fr the first time in nearly ten years, a doctor and a nurse, both graduates of Bellevue Hospital, who met while completing their studies there, will be married this evening. The ceremony will be performed at 5 o'clock at the Little Church Around the Corner. Miss Anne Christianson of Crookston, Minn., member of the 1924 class of nurses at Bellevue, will be the bride, and Dr. William Bates Trautman [Woodford Bates Troutman] of Shepherdsville, Ky., the bridegroom. An informal reception at the Pennsylvania Hotel will follow.

On Monday they will sail for Bermuda and later go to Europe, returning Sept. 15. They will live at Cherokee Park, Louisville. Ky., where Dr. Trautman [Troutman] will be associated in practice with his uncle, Dr. William [Samuel Woodford] Bates, a well known physician of that city.

The romance dates back two and a half years, when the doctor, then an intern, and Miss Christianson, then a probationers, met at the bedside of a patient.

Dr. Trautman [Troutman] is a graduate of the University of Louisville, class of 1920, and has recently been taking a post-graduate course at the Harlem Nose and Throat Clinic. He is the son of Mrs. Ada Trautman [Troutman] of Shepherdsville, Ky., and his father was President of a bank and a well known attorney in that part of Kentucky.

The bride-to-be is the daughter of Mr. and Mrs. Martin Christianson of Crookston, Minn., and formerly taught in the high school in that town. She also taught for a time in Chevy Chase High School, Washington, D.C. The best man will be Dr. William Evans, a classmate of Dr. Trautman [Troutman], and the bridesmaid will be Miss Pocahontas Morris of Hazard, Ky., a classmate of the bride-to-be.

Note: According to the Directory of Deceased American Physicians, 1804-1929, Samuel Woodford Bates was born 7 May 1874 in Shepherdsville, and died 17 Oct 1925 in Louisville. He attended the University of Louisville School of Medicine, and practiced in Shepherdsville and Louisville.

Shepherdsville - Champions' June Blossom, a purebred Jersey cow owned by H. A. Baldwin has completed her first official production test in which she yielded 12,631 pounds of milk in 305 days, and 652.27 pounds of butterfat. 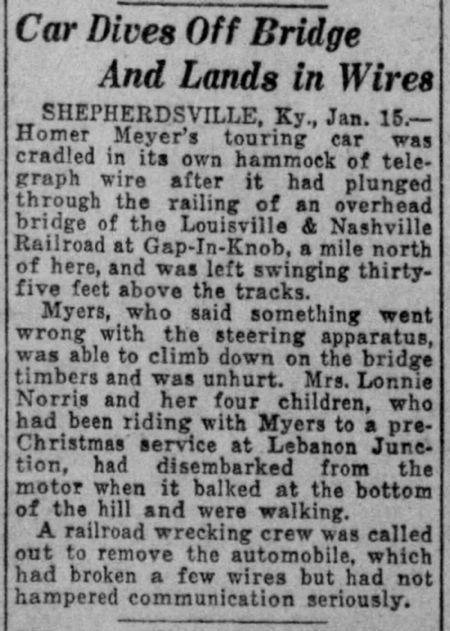 SHEPHERDSVILLE, Ky., Jan. 15. - Homer Meyer's touring car was cradled in its own hammock of telegraph wire after it had plunged through the railing of an overhead bridge of the Louisville & Nashville Railroad at Gap-in-Knob, a mile north of here, and was left swinging thirty-five feet above the tracks.

Myers, who said something went wrong with the steering apparatus, was able to climb down on the bridge timbers and was unhurt. Mrs. Lonnie Norris and her four children, who had been riding with Myers to a pre-Christmas service at Lebanon Junction, had disembarked from the motor when it balked at the bottom of the hill and were walking.

A railroad wrecking crew was called out to remove the automobile, which had broken a few wires but had not hampered communications seriously.

Kurtsinger, who had been ill less than one month, was a native of Shepherdsville, Ky. He retired from horse racing in 1937.

He rose to saddle stardom almost overnight when he rode Twenty Grand to victory in the 1931 derby. In 1937, riding War Admiral, son of Man O'War, he piloted the spirited 3 year old in victory in the Derby and went on to complete the triple crown on him in the Preakness and the Belmont.

She was a former school teacher, past director of TC&I laboratory in Birmingham, Alabama, a charter member of the Bullitt County Woman's Club and a member of St. Aloysius Catholic Church, Shepherdsville. Mrs. McBride was the former Ivy Troll and the widow of the late Martin J. McBride.

The Bullitt County History Museum, a service of the Bullitt County Genealogical Society, is located in the county courthouse at 300 South Buckman Street (Highway 61) in Shepherdsville, Kentucky. The museum, along with its research room, is open 9 a.m. to 4 p.m. Monday, Tuesday, Wednesday and Friday; and from 9 a.m. to 6 p.m. on Thursday. Admission is free. The museum, as part of the Bullitt County Genealogical Society, is a 501(c)3 tax exempt organization and is classified as a 509(a)2 public charity. Contributions and bequests are deductible under section 2055, 2106, or 2522 of the Internal Revenue Code. Page last modified: 08 Sep 2018 . Page URL: bullittcountyhistory.org/newstidbits.html